SISTER Wives’ Christine Brown has shown off weight loss in skintight pants and reveals how she dropped the pounds in a new video.

The Sister Wives star has been making a number of changes since her split from her ex-husband Kody Brown, 53, in November of 2021.

Christine, 50, shared the dietary supplement advertisement on her Instagram Tuesday.

The post is captioned, “My PINK DRINK called Slim Hunger Control has been a game changer in controlling my cravings, suppressing my appetite, and helping me balance my blood sugar so weight loss isn’t a struggle!”

The video shows Christine eating a celery and peanut butter snake before cutting to photos of the 50-year-old wearing skintight plaid pants and a blue top.

Text over the images reads, “This is how I did it…,” “I drink Slim Hunger Control EVERY DAY,” and “You should too,” as Christine flaunts her slim figure while showcasing the Pink Drink. 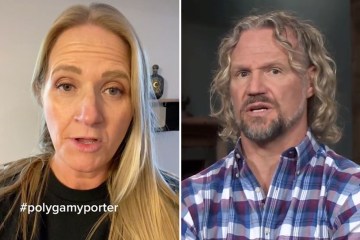 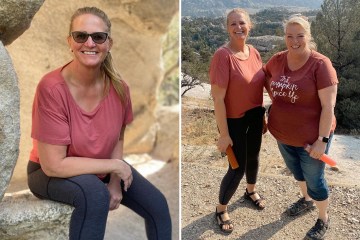 In an Instagram Story, Janelle, 53, uploaded a photo from the wedding, which took place on October 22md.

The TLC star posed with Christine as they both showed off their stunning gowns.

Janelle captioned the image: “Christine and I at Logan and Michelle’s wedding last night. Such a beautiful night.”

Most read in Entertainment

Christine appeared to have taken her three daughters as her dates to the wedding.

In another Instagram photo, the TV personality huddled with Truely, 12, Ysabel, 19, and Gwendlyn, 20, under the gazebo.

She wrote: “I LOVE being a Mom to these beautiful daughters!! So BLESSED!!”

Unfortunately, Kody Brown, 53, does not appear in any photo from his son’s wedding day.

Last week, Christine dropped a spin-off bombshell and revealed to fans if she will appear on the TLC show’s next season.

In an interview with Entertainment Tonight, Christine opened up about life after her divorce from Kody and her future with the series.

The reality TV star revealed: “I made a promise to Kody and everybody else that I would stay in Sister Wives as long as we have the show just to be fair.”

She continued, “It’s what our family’s been doing for so long. I feel like it would be disloyal if I decided to not be part of the show.”

The 50-year-old also addressed the possibility of a spin-off: “As far as a spin-off, dude, I’m totally open, no idea what it looks like, but absolutely, that’d be just fun as heck.”

Since her divorce from Kody, Christine has relocated to Utah with her daughter, Truely.

When asked about life nearly one year after the split, the TV personality admitted how “simple” her life has become.

She explained, “I’m single now, right? So I kind of just decide what I want to do and then do it. It’s been just very, very simple.”

The mother-of-six continued, “Everything’s just a lot easier as far as just planning and day-to-day life.”

Per ET, Christine disclosed that she feels “more confident” since separating from Kody and that it feels like an “enormous weight has been lifted.”

When discussing the timing of her decision the reality star stated: “I think if I had made the decision sooner, I might have left out of anger…that would have been a mistake.”

On the opposite side of the coin, Christine voiced “The same thing with leaving later, Kody and I probably would have started fighting, I’d imagine.”