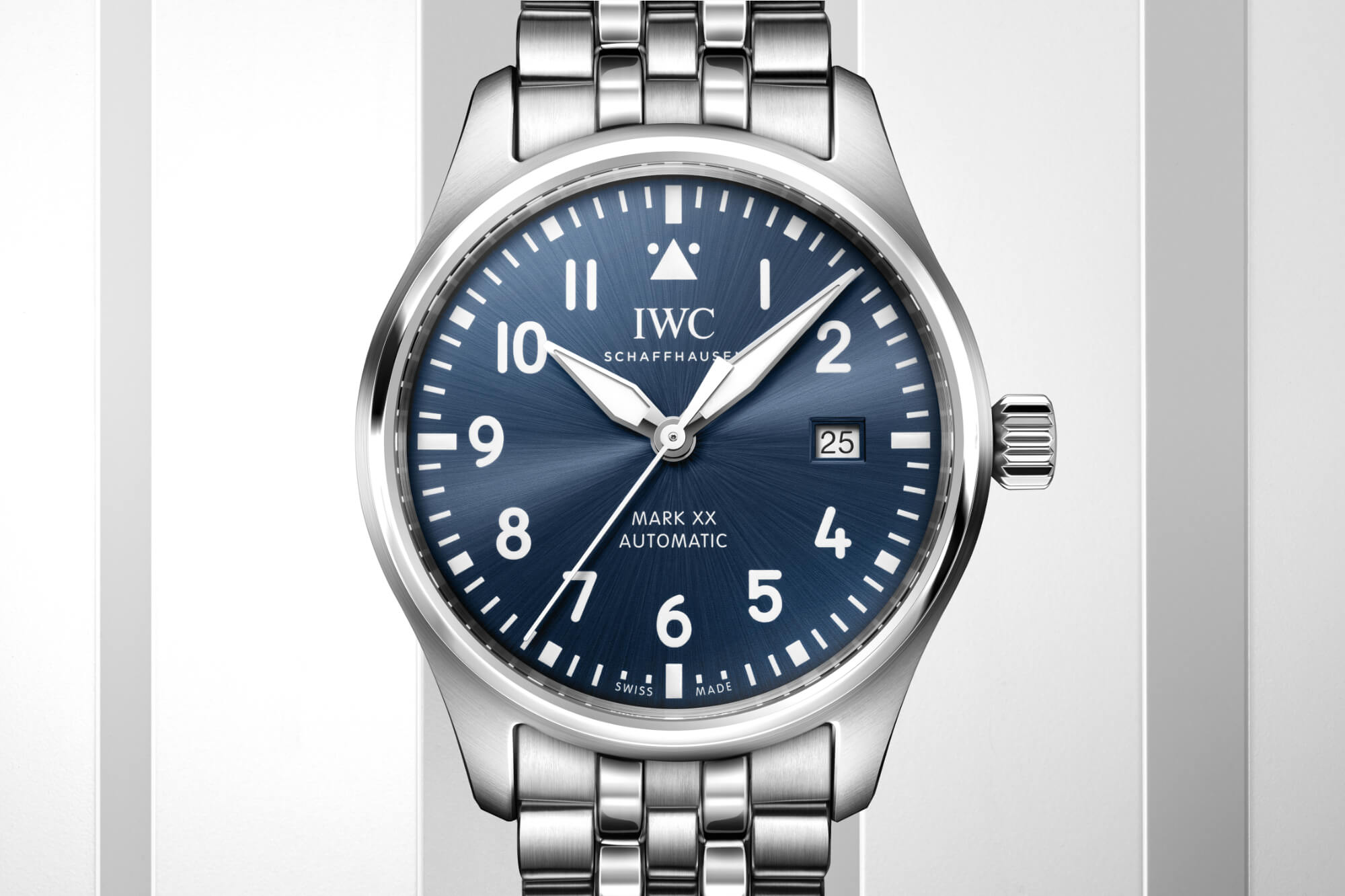 Did you know that IWC dropped a new Pilot’s Watch model? No, not this specific release. A few months ago, without notice, the Schaffhausen brand released the IWC Pilot’s Watch Mark XX, a not-insubstantial upgrade from the still-available Mark XVIII. That initial stealth drop only showed two variants: a black dial and a blue dial, both with matching leather straps. It almost seems like a stutter step, because here we are, less than six months on, and the brand is announcing the “completion” of the Mark XX collection. To round things out, they’ve added a green dial and a bracelet option for a total of six variants. Now that we have the full collection, though, it’s worth a further look at what it is and how it builds on past Mark watches. 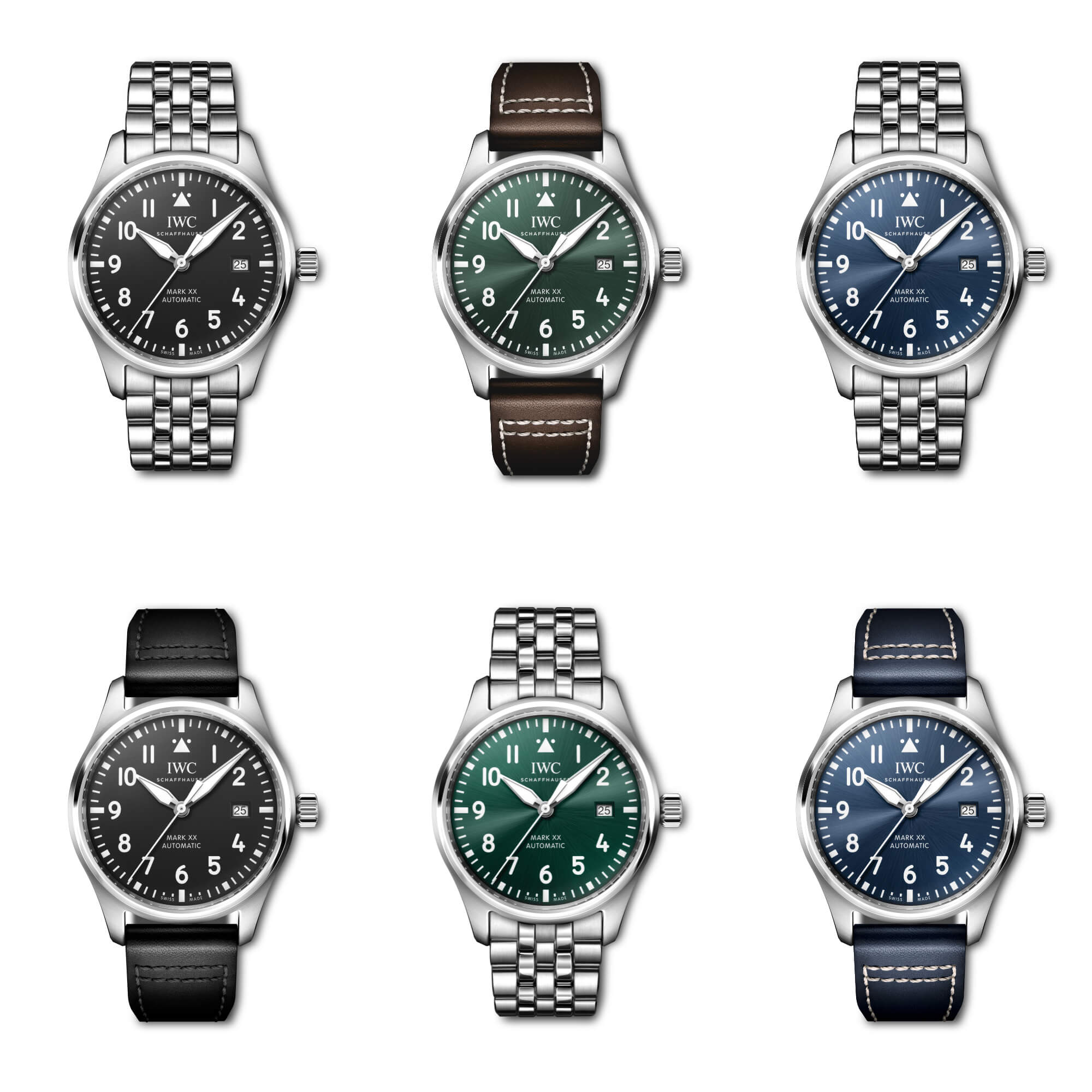 The new IWC Pilot’s Watch Mark XX comes in three colors: classic matte black, sunburst green, and sunburst blue. The dial of the Mark series has always been about simplicity: In maintaining the spirit of the pilot’s watch as a tool for those actually flying, legibility was made the only priority. The Mark XX sees small tweaks to this end. The dial is still printed with white, but the cardinal indices have been extended and the numerals moved in a bit to make room for them. The handset remains the same, with silver hands filled with Super-LumiNova. The date window is no longer color-matched (on the black dial model), which is a shame, but not a huge issue since there is so much white on the dial that the white of the date wheel doesn’t stand out. 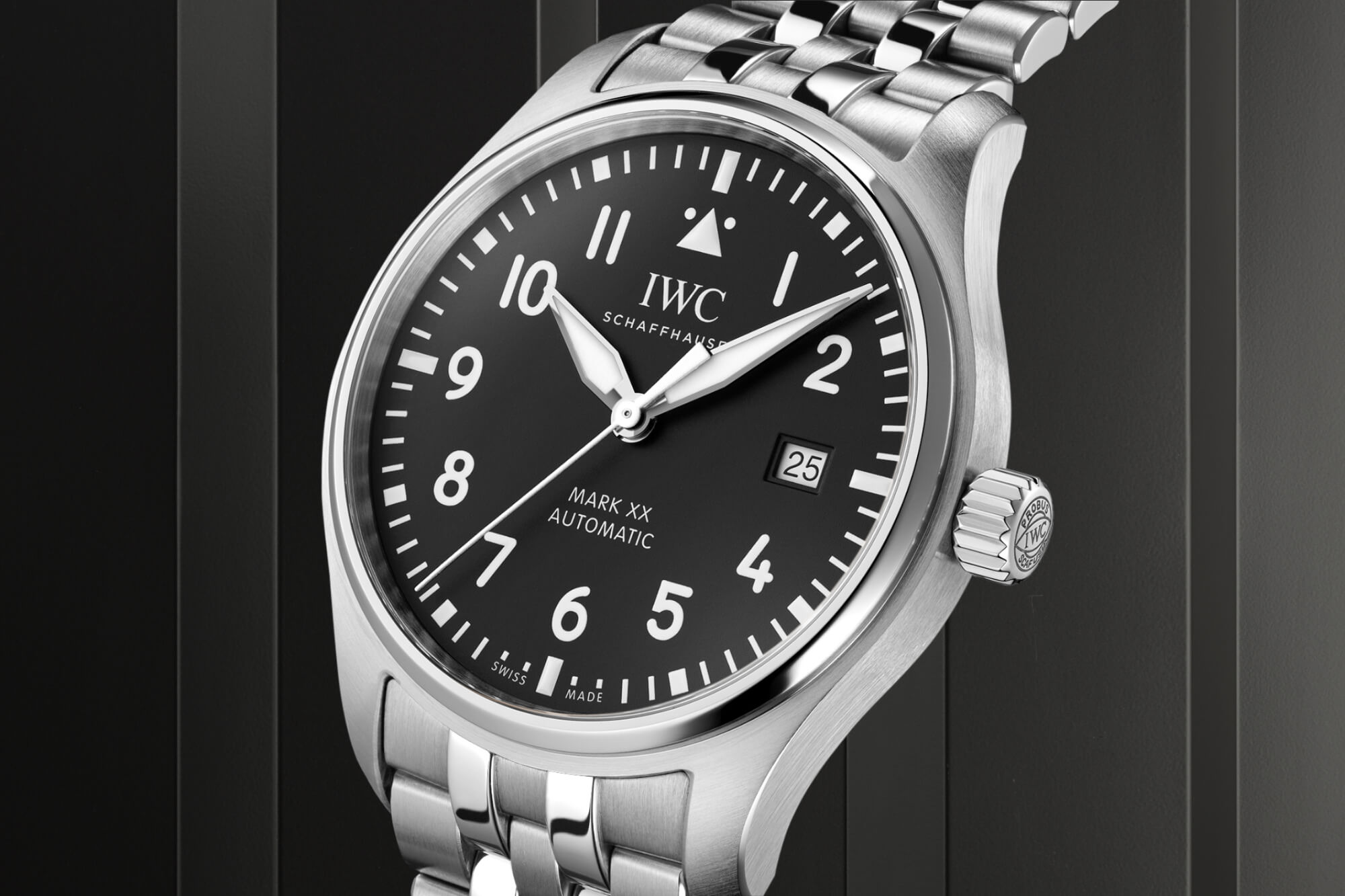 The 40mm case has also seen some minor tweaks. The lugs have been shortened to 49.2mm from 51mm and the thickness has been slimmed to 10.8mmm from 11mm. The case is brushed throughout, save for the bezel and a sliver of a chamfer along the lugs. Another change is that the crown has been increased in size, which should improve its operation. Further, water resistance has been bumped from 60m to 100m, allowing a bit more comfort and making this officially a go-anywhere, do-anything watch. The new dimensions of the Mark XX make it look like it will feel a bit more prominent on the wrist, given its shorter lug-t0-lug that will have the case proper standing out a bit more. The watch is offered on a leather strap (black and blue are matched to the dial, green comes with a brown strap) or a 5-link bracelet with a blend of polishing and brushing fitted with a push-button folding clasp. 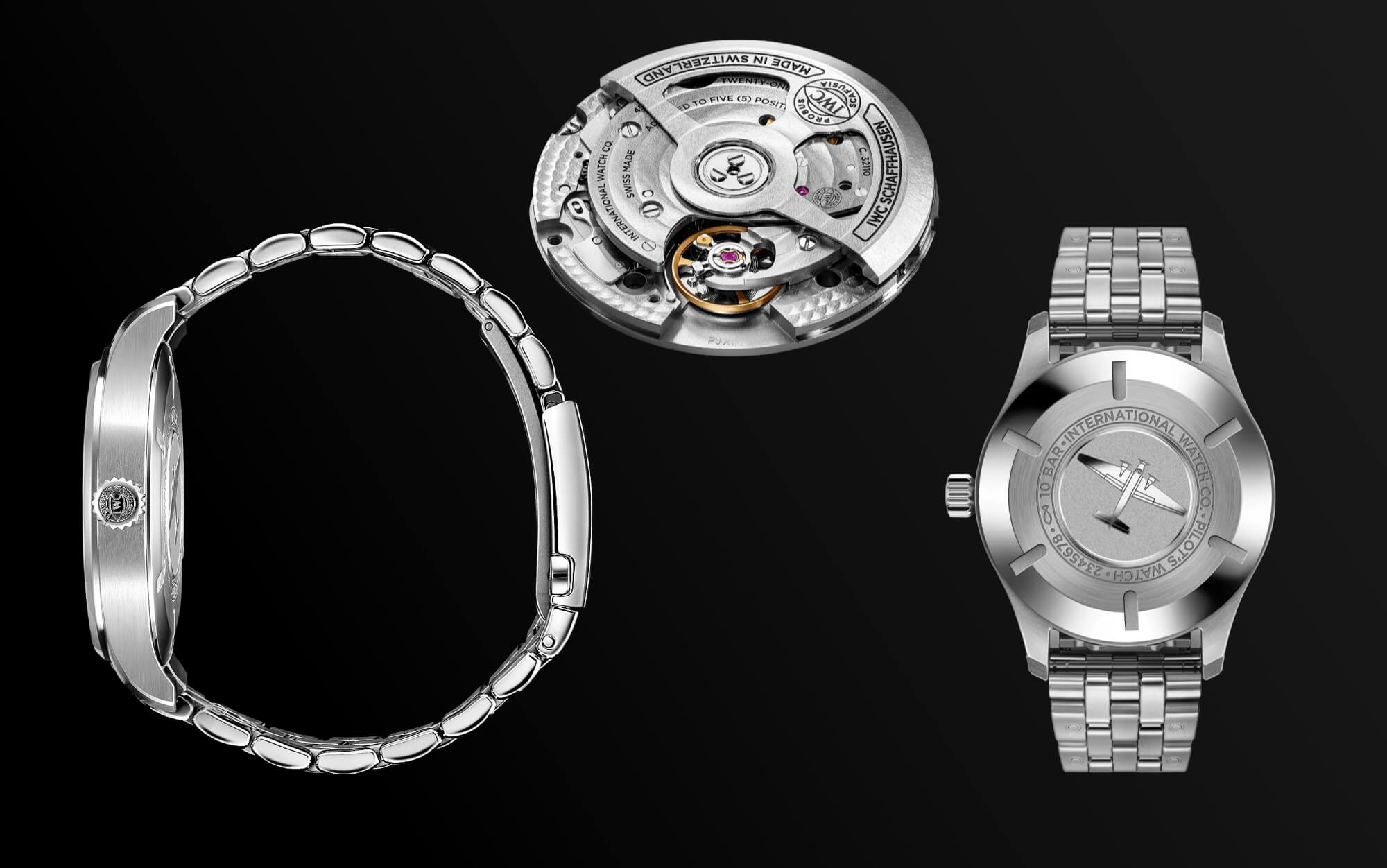 The two biggest changes remain hidden on the wrist, though. The first is an entirely new, in-house movement, the IWC 32111 Calibre. The main upgrade here is the extended 120-hour power reserve, tripling that of the Sellita-based 35111 found in the Mark XVIII. It maintains the 28,800 vph, adds Côtes de Genève and perlage finishing, and reduces the number of jewels necessary from 25 to 21. The other update is the strap and bracelet options. Notably, they all feature IWC’s EasX-Change quick-change system, which allows the strap or bracelet to connect to any compatible springbars by the simple push of a tab. To boot, the pin buckle on the straps can be swapped between compatible straps. It’s an interesting take on the increasingly popular proprietary strap-changing system, which usually integrates the springbar into the strap or bracelet, and as mentioned, it is compatible with any watch fitted with the right springbars. 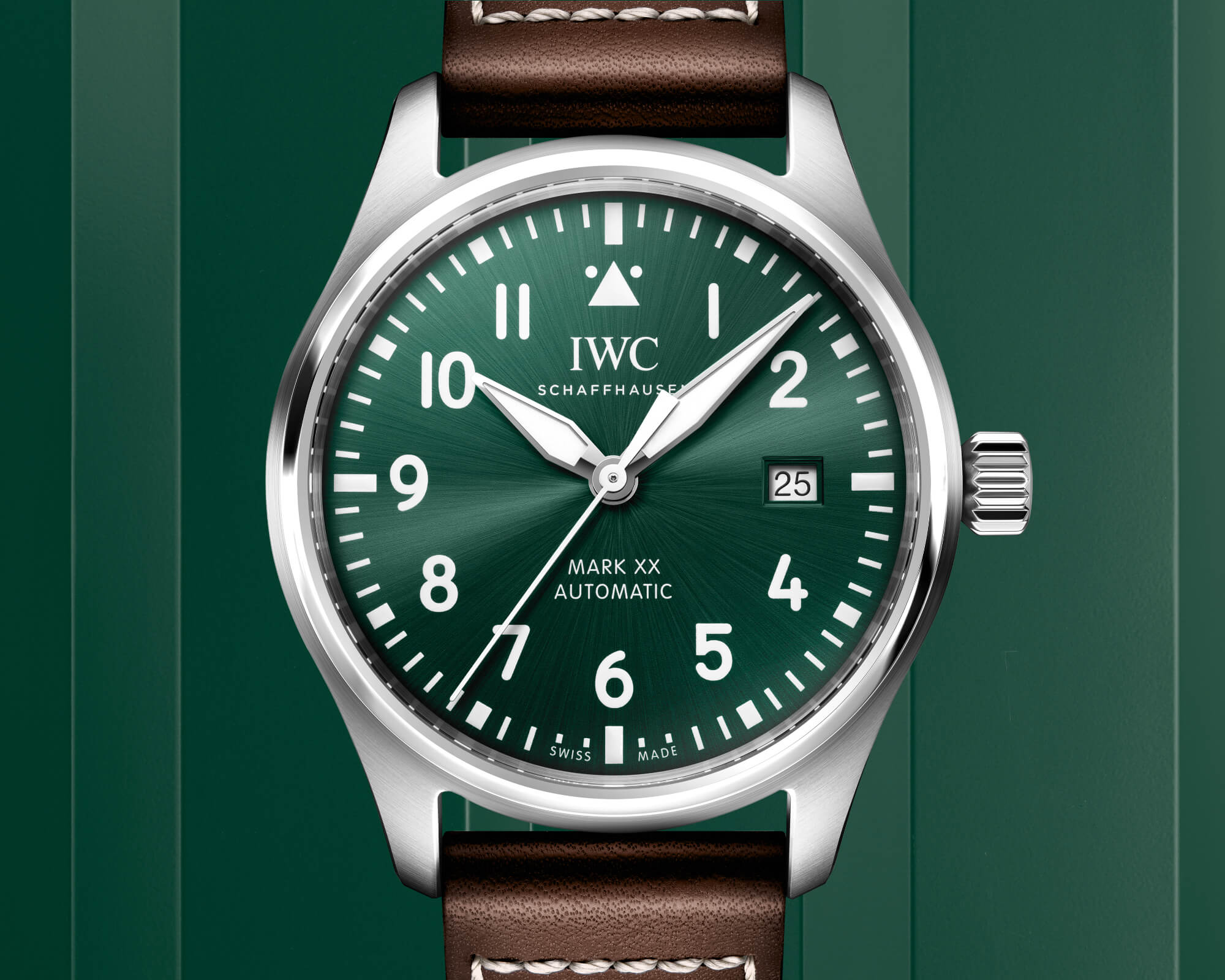 If we’re being honest, this is an incremental, if welcome, evolution of the Mark series. It sees the introduction of a new movement, the integration of IWC’s proprietary strap changing system, and a few tweaks to the dial and case. For those who have always loved IWC Pilot’s watches, the Mark XX and its six options will be a no-brainer. For those who may have been waiting to snag one of the Mark series watches, the Mark XX is technically the best ever made. Of course, for those who find the collection too bland, this new series is unlikely to change your feelings. The IWC Pilot’s Watch Mark XX is priced at $5,250 on leather and $6,150 on bracelet (for those keeping track, that’s $600 and $750 more than their respective predecessors). For more information, please visit the brand’s website.